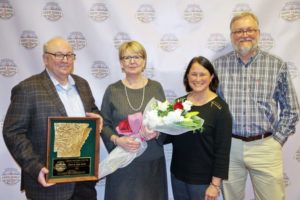 Chris and Judy Isbell of Humnoke, Arkansas, were named the 2018 Arkansas Farm Family of the Year at the recent Arkansas Farm Bureau’s annual convention.

They will now compete with 10 southeastern state winners in the 2019 Swisher Sweets/Sunbelt Expo Southeastern Farmer of the Year program in Moultrie, Georgia, in October 2019.

The Isbells say they are humbled to receive the honor.

“I was shocked, when they called our name,” Chris says. “But we are very honored. Our farm is a group of people. It’s a family. It’s not just me. It’s not just Judy. It’s Shane and Lisa, our son Mark and our daughter Whitney and their families. Of all the people in that room, many of them I know and many I don’t, they are all worthy. It is an honor to be selected out of that group.

“People need to understand their food doesn’t just come from the grocery store. Farmers are out there working hard every day to produce it. I’m just proud to be in a business that feeds people.”

The Isbells have cultivated rice in Lonoke County for more than 70 years and currently grow 3,000 acres of the crop. Isbell Farms is a fifth-generation family operation and partners include Chris and Judy Isbell, their son Mark and wife Marda, their daughter Whitney and husband Jeremy Jones, and their nephew Shane Isbell and wife Lisa.

The Isbells pioneered and employ “zero-grade practices” on their farm as a means of conserving water. They also were a member of a small group of farmers who marketed and produced the world’s first carbon credits created through rice production.

Chris has been farming for 50 years and guided the farm’s shift to Japanese varieties. Of the 3,000 rice acres, approximately 100 are grown for the production of sake. They also provide specialty varieties to sake companies, boutique brewers and other businesses throughout the United States and the world.

The Isbells were selected from the eight 2018 District Farm Family of the Year winners, which included:

• Mark and Dee Ahrent and Michael and Rhonda Ahrent of Corning (Clay County) in the Northeast District;

• Carl and Christie Campbell of Harrison (Boone County) in the Northwest District;

• Jimmy and Crystal Hewitt of Fouke (Miller County) in the Southwest District;

• Travis and Valerie Sims of Center Ridge (Conway County) in the Western District; and