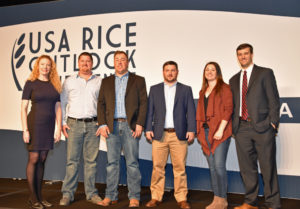 Louisiana farmer Jason Waller of Mer Rouge, Louisiana, was among seven people chosen for the new Rice Leadership Class. Waller also is a member of the Louisiana Rice Research Board. Others chosen for the class are Mallory Everett, Adam Shea and Garrett Williams, all of Arkansas; Derek Sohnrey and Christine Wylie, both of California; and Elliot Maschmann, of Missouri.

In the student scholarship contest, Breahna Sommers of Church Point, Louisiana, won third place with her video, “The Importance of Louisiana Rice.” She received a $1,500 scholarship for her entry. Her video will be posted on the USA Rice website along with the other winners.

The 2019 rice growing season was one of the most difficult for many Louisiana farmers, LSU AgCenter rice specialist Dustin Harrell said at the conference. He recalled that the cold, wet spring of 2019 started the year badly, then Hurricane Barry in July damaged the crop at a critical point of growth.

Many farmers had to deal with smut disease in Louisiana because of excessively wet weather.

“We had it at epidemic levels,” Harrell said.

“We had some loads of rice turned down at the mills because of smut,” he said.

A decision will be made soon on the possible release of a new Clearfield long-grain variety, Groth said.

The Rice Research Station will display its work to the public at the 2020 field day, July 1.

Rice farmers have been hurt by low rice prices resulting from an oversupply of the commodity. Arkansas dominates U.S. rice acreage, and it is expected to increase the amount of rice grown in 2020.

The 2020 acreage could decrease if the U.S. and China reach a trade agreement that would encourage more soybean planting. Soybean prices are currently about $9 a bushel.

“You move that closer to $10, and you’ve got people’s attention at that point,” Stiles said.

It’s uncertain if a third year of payments to compensate for the China trade dispute will be made to soybean farmers, she said.

John Owen, chairman of the Louisiana Rice Promotion Board, talked about a promotion campaign conducted in north Louisiana in 2018 and 2019. The campaign was funded with a $100,000 grant each year from the Louisiana Department of Agriculture and Forestry.

“We expect to get another grant next year,” he said.

North Louisiana was chosen because it represents the typical American consumption rate of rice. The Shreveport area was targeted the first year, and the program focused on Alexandria in 2019.

“The significance of domestic promotion cannot be overstated,” Owen said.

“There’s so much that people don’t know about rice,” he said.

The marketing effort has served as a pilot project before starting a nationwide campaign for rice. The market has to be cultivated, “just like a farmer has to apply fertilizer to their field to get the maximum returns,” Owen said. 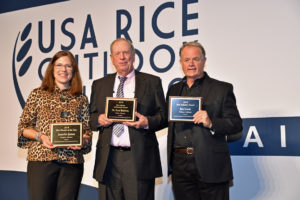 Also at the conference, Jennifer James,of Newport, Arkansas, was honored as Rice Farmer of the Year. Ford Baldwin, retired weed scientist from the University of Arkansas, was recognized with the Lifetime Achievement Award, and weed scientist Jim Cook of Williams, California, received the Rice Industry Award. The awards are presented annually by Rice Farming magazine along with sponsors Horizon Ag and USA Rice.

Delta Plastics is one of the largest recyclers of heavily soiled and contaminated plastic in the United States and since 1998 has diverted 1 billion pounds of waste material from landfills.

Arkansas Gov. Asa Hutchinson was on hand to welcome everyone to Arkansas, and he talked about the significant economic benefits of rice production for the state.