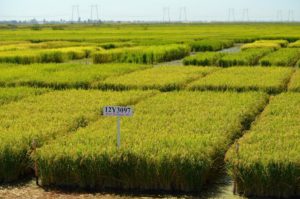 The newly released variety 12Y3097, now called M-210, has a gene that imparts resistance to both races of blast found in California — photo by Vicky Boyd

The California Cooperative Rice Research Foundation Board of Directors recently released two new rice varieties for California producers — a Calrose-type medium grain with blast resistance and a jasmine-type long-grain. They come from the breeding program of the Rice Experiment Station near Biggs, California.

Experimental 12Y3097, now called M-210, is an early maturing U.S. medium-grain, temperate japonica Calrose-type. Its main attribute is the Pi-b gene that gives it resistance to both blast races observed in California. This variety is a selection from a DNA marker-assisted backcrossing project started in 2005 by RES rice pathologist Jeffrey Oster, now retired.

He sought to develop isolines of M-206 that contained individual blast-resistance genes from various germplasm sources. Isolines of a cultivar are genetically identical except for one different gene.

Oster made seven backcrosses of M-206, California’s most widely grown variety, to an RES short-grain line that derived its blast resistance from a Korean variety, Daegwanbyeo.

Dr. Cynthia Andaya from the station’s DNA Lab conducted the DNA marker testing at each backcross to select those seedlings with the Pi-b resistance gene. Dr. “Butz” Andaya made the selections and moved this line through the breeding program to its release.

M-210 is essentially M-206 with a blast-resistance gene. It is being released as a replacement for M-208, which has resistance to only one of two known blast races in California.

It heads earlier than M-208 and similarly to M-206. California’s climate is not conducive to blast disease development; however, our varieties are very susceptible to blast, and it can occur in certain field, areas and years.

Calaroma-201, formerly known as Experimental 15Y84, is an early maturing Jasmine-type long grain. It is the first of this market-type released by the RES and was develop by Dr. Farman Jodari, RES long-grain project leader who retired in 2017.

It has a complicated pedigree that includes a high-yielding Chinese variety, a mutant Jasmine line developed and released by USDA-ARS/University of Arkansas (JES), and one from the RES.

In three years of testing, this new line had an average yield advantage of 6.3 percent and 1.5 percent over A-202 and L-206, respectively. Calaroma-201 heads five days later and is slightly taller than L-206.

The area of adaptation is similar to L-206, but it is not recommended for colder locations. Calaroma-201 has low amylose content and low gel type, so it cooks softer than typical U.S. long grains and is more like imported Jasmine rice. Market quality evaluations have been positive.

Foundation seed of M-210, and Calaroma-201 will be allocated to commercial seed growers for planting this spring. These varieties will be grown only as a class of certified seed in California, and applications are being made for protection under the U.S. Plant Variety Protection Act and U.S. utility patents.

Testing, development and release of these varieties was made possible by grower funding to the California Rice Research Board.

Dr. Kent McKenzie is a rice breeder and director of the California Rice Experiment Station in Biggs. He may be reached at KMcKenzie@crrf.org.