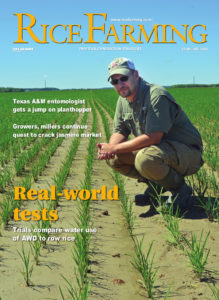 Curtis Berry has long-standing convictions about protecting the environment and natural resources.

After hearing and reading about two irrigation systems with water-savings potential — alternate wetting and drying and row rice — the Tunica, Mississippi, producer decided to put them to the test on his farm in 2017. Mississippi State University also approached Berry last season about doing just that with an on-farm trial that involved AWD using multiple-inlet irrigation compared to row rice, also known as furrow-irrigated rice.

As a member of the Yazoo Mississippi Delta Joint Water Management District board, Berry says he also feels a need to lead by example.

“We’ve been aware of these water issues for a long time, and I want to be part of the solution and try some of these conservation techniques,” he says.

Berry isn’t the only one comparing the two systems. University of Arkansas rice Extension agronomist Jarrod Hardke started trials at Pine Tree and Keiser Division of Agriculture research stations in 2017. The research involves large blocks of about one-third acre each aiming to maximize AWD and row-rice management.

“It was designed to be of sufficient size to mimic growers’ fields,” he says.

2016 was the first season that Mississippi Department of Environmental Quality implemented a voluntary program recommending growers have flow meters on at least 10 percent of wells pumping from the aquifer. That’s an increase from the 5 percent voluntary participation the department set in 2014.

As part of the program, growers also were requested to report annual meter readings.
In the 1980s, fewer than 3,000 wells were issued permits in the Delta, according to MDEQ figures. Today, that number is more than 19,000.

Rather than keeping a 2- to 4-inch flood on rice during most of the growing season, AWD involves letting the flood naturally subside to where the water is at or just below the soil surface before reflooding. The system also relies on collapsible poly tubing and multiple-inlet rice irrigation to reapply water to the field as quickly as possible.

Based on MSU research trials conducted between 2014 and 2016, AWD can save growers up to 30 percent of water compared to conventional flood and without affecting yields. In the end, growers may save up to $50 per acre using AWD, according to the research.

Row rice is planted on beds and furrow irrigated much like other row crops. Many row rice growers block the ends of the rows, allowing the water to back up into about the bottom third of their fields. This results in a drier top third, with a flooded bottom third.

In a 160-acre field, Berry devoted 40 acres to row rice with the remaining 120 put into AWD. The row rice was planted on 30-inch beds. 2017 marked the first time he had used multiple-inlet rice irrigation.

Both fields were planted to the same hybrid – XP753. He also applied Roundup and Command at planting, followed by 1/2 pound of Facet and 1 quart Prowl preflood to each field.

MSU research associate Dan Roach had installed moisture sensors and told Berry when to reapply the flood after allowing the water to dissipate in the AWD field.

About six weeks into the season-long trial, Berry was already favoring one system. But he withheld final judgment until after harvest.

“It’s very interesting and I’ve already learned a lot through the first months of the crop and I will learn more,” Berry said early in the season. “But I like what I’m seeing with AWD. From what I’m seeing, row rice wouldn’t work for me as I’m going to incur more chemical expense.”

In his row-rice field, Berry had to apply mid-season Sharpen because Palmer pigweed was starting to break throughout without the flood to suppress it. He also had increased management because of the regular irrigations needed.

Berry says he ended up pumping only slightly less water in his AWD field than he typically would for permanent flood but that was because of timely rains.

“As soon as we were going to flood, we got a rain that was pretty significant,” he says.

Yields in the row-rice field were off about 15 percent compared to his conventional flood fields.

Berry says he plans to repeat the side-by-side trial in 2018. This time, though, he will put it on heavier soils that won’t dry out as quickly between row-rice irrigations. He’s already identified two adjacent 40-acre fields.

Berry’s experience with AWD also has prompted him to plan to use it to some degree on most of his zero-grade fields this season.

“Every year, more and more people are doing it and they’re getting more comfortable with it,” Berry says. “This is something I know for a fact where I can use up to half the water I’ve been using, and that’s significant.”

Hardke chose his trial locations to examine how soil type factors into AWD and row rice. Pine Tree has lighter soils whereas Keiser has heavy clay.

The large blocks also allowed him to use collapsible poly tubing to irrigate the AWD treatments and had long enough runs (750-1,200 feet) for furrow irrigation of row rice to be similar to grower fields.

Hardke says he plans to repeat the trial this season and in 2019 to see if the trends he saw last season, which was unusually mild and wet, continue under different weather conditions.

This season he says he also hopes to conduct small-scale trials within the larger blocks to examine varietal and hybrid response as well as optimum nitrogen treatments.

“We want to fine-tune some of our nitrogen recommendations and varietal work,” he says. “We actually had some growers plant some additional strips of other varieties, and they looked great. But it was a very nice year and a low-disease year.

You’re taking a pretty big risk any time you’re planting a variety that is blast susceptible. We’re going to select some of the varieties that have a better blast package to see if they will work.”

That’s why most growers favor hybrids for row rice – they are a bit more stress tolerant and have blast resistance.

Hardke says he also plans to look at irrigation intervals for row rice to see how potentially higher temperatures and less rain could affect application timing and yields.

Regardless of the irrigation method, he says growers should avoid irrigation stress between green ring to half-inch internode elongation and again around flowering. Stress during those periods can significantly reduce yields.