Horizon Ag expects to have adequate 2017 seed supplies of its tried-and-true Clearfield varieties. 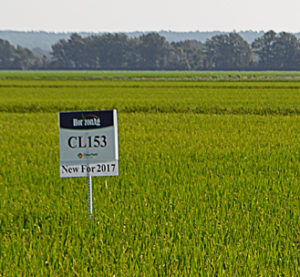 The same weather issues that took a toll on much of the Mid-South’s 2016 rice crop also affected seed production for Horizon Ag. But the Memphis, Tenn.-based marketer of pure line Clearfield varieties expects seed supplies of all but its two new releases to meet demand, says Tim Walker, general manager.

“The seed crop did take a hit,” he says. “But one of the good things about pure line seed production is the plant is less affected from an overall standpoint. Any time we project what the market is going to be, we’re having to project it out two to three years. Because we’re efficient seed producers,
we can always hedge on the high side.”

Pure lines, sometimes referred as inbreds, do not require two different parent lines for seed production. Instead, the plants are self-fertile, a trait that removes one variable from seed production.

CL153 and CL172, two long-grains Horizon Ag is launching this season, offer high milling quality with better agronomics than some of the earlier Clearfield releases.

“They’re highly sought after, at least that’s what the market is telling us,” Walker says. “This is the first year of their launch, and there’s probably not enough for every farmer to get all they want. But we do have enough, and more of the CL153 than CL172, to supply probably close to 250,000 to 300,000 acres.”

Developed by Louisiana State University, CL153 has a yield potential equal to or better than CL151 but with blast resistance and lodging resistance. The newcomer also has excellent grain quality and milling. 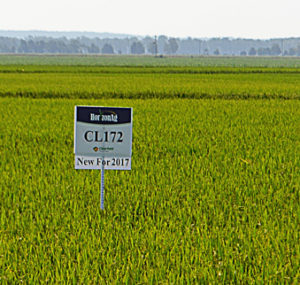 CL172 produces a bold, translucent grain close to 7 millimeters long with superb cooking quality. These characteristics are coveted by Central American consumers and importers. The variety also has blast resistance and lodging resistance along with outstanding grain quality and milling.

For the 2017 season, Walker estimates that growers in the Mid-South will plant 2 million to 2.2 million rice acres altogether.

“That having been said, we should have enough of those two varieties to fill 15 percent of the total Southern rice acres, and I think that’s adequate in a launch,” Walker says.

CL163, launched on a limited basis in 2016, is more of a niche long-grain with a high amylose content designed for par-boiling, canning, food service and packaged rice. It will be more widely available for the 2017 season.

“When you add CL163 to the new launch, that takes us from 15 percent to 20 percent, so we’ll have adequate supplies,” he says.

Mainstays CL111 and CL151 should be able to more than fill in any gaps in demand for long-grain Clearfield varieties, Walker says.