Most rice cultivated in the Mid-South is produced using the direct-seeded, delayed-flood production method. In this system, a continuous flood is maintained from five-leaf growth stage until a few weeks prior to harvest.

Currently, there is emphasis being placed on alternative production strategies to aid water conservation in Mid-South rice production systems. These newer production practices include alternate wetting and drying (AWD) and furrow-irrigated (row rice). In both of these systems, a permanent flood is not held as long as in the direct-seeded, delayed-flood system. These new water management systems offer benefits of reduced water consumption in many instances, but they will require great attention to maximize agronomic inputs.

Thinking back to my dissertation defense, one of the questions I was asked was, “Why do we flood rice? It doesn’t require a flood to complete its life cycle.”

The short answer is we gain many agronomic advantages from maintaining a flood, including help with weed control, improved nitrogen-use efficiency, and an increase in field resistance to many rice disease complexes.

Weed control seems to be getting more difficult every year with the increasing trend in herbicide resistance. There are 12 herbicide-resistant weed species in Mississippi, five of which are problematic in rice.

Research has proven multiple times that establishing a permanent, continuous flood immediately after N fertilizer application to dry ground results in optimal grain yields. Nitrogen use efficiency (NUE) in rice produced with the direct-seeded, delayed-flood production system is greater than that observed with any other row cropping system in the Mississippi Delta.

Recent data suggest similar NUE potential with AWD production systems if the flood is held for a minimum of three weeks after establishment.

If you’re thinking about switching or have switched to one of the alternative rice production systems in 2017, keep the following in mind. Choose a variety with a good disease package, have a plan for potentially altering your nitrogen and weed management strategies, and scout for disease regularly. Newer production methods can be successful with detailed and timely attention to agronomic inputs.

Overspend on residuals to save money!

Everyone is looking for ways to cut costs going into this rice season. With an expected reduction of more than 300,000 rice acres for Arkansas this year, for many the cost savings begins with planting something other than rice. For the 1 million to 1.2 million acres still going into rice, let’s think about ways to save.

We must have our base fertility correct. This means putting out the required phosphorus, potassium and zinc to meet our needs based on soil test recommendations. If you have fields where fertility levels fall in the medium to optimum categories, you may be able to trim rates and get by, but weaker spots in the field may make you pay for that decision.

We need to treat the seed. Use both a fungicide seed treatment package and an insecticide. The fungicides protect emerging plants from the seedling disease complex. This protection only lasts for two to three weeks but can often be worth it in preventing severe plant losses that lead to replants. Insecticide seed treatments on average provide a positive return more than 80 percent of the time. The average yield response is more than 8 bushels per acre – with or without insect pressure.

We need to keep the seeding rate up. The plan is to always try to get the optimum seeding rate out there – no more and no less than we need to optimize yield. Nobody knows better than an individual farmer what types of plant stands he or she can achieve.

So let’s get to where we can save a little money. Spending the money you need on residual herbicides up front will pay huge dividends in the long run. Activated pre-emergence herbicides provide weeks of weed control at relatively low costs.

When looking over the Arkansas Rice Research Verification Program results, one of the standouts for cost savings has always been our emphasis on using overlapping residual herbicide chemistries with multiple modes of action. From 2014-2016, herbicide costs have been less than $70 per acre for fields enrolled in the program. Average yields for the program also outpace state average yields by 10-plus bushels annually.

Post-emergence herbicides to clean up jailbreaks are where we lose money and get behind on costs. Start clean and stay clean.

As of March 7, some Texas rice farmers have already planted due to unseasonably warm temperatures. This means farmers are on the edge of their seats to plant. By and large, this is a good thing, because once it starts raining, who knows when it will quit. In the past, I have had farmers tell me they plant when Indian paintbrush—also known as owl’s clover—begins to bloom.

Last week driving to work, I saw a smattering of this wildflower blooming along the roadside, so it’s GO time!

I wanted to talk a little about growing organic rice in Texas. We estimate about 15-20 percent of Texas’ 190,000 rice acres in 2016 was organic. Organic rice acreage continues to increase in Texas because of the low price for conventional rice.

I suggest planting organic rice later than you normally plant conventional rice. Later plantings are associated with higher temperatures, which encourage rice to emerge quicker. This helps rice compete with weeds. Another tactic to encourage rapid emergence is to soak seed before planting. This can shave off a couple days from planting to emergence.

Getting a good, strong stand is absolutely essential to producing respectable organic rice yields. Rice water weevil is probably the most serious insect pest of organic rice, and it prefers thin, weak stands, so increase your seeding rate and don’t allow your fields to drain after applying the permanent flood.

Some farmers drain fields to control rice water weevil, but I don’t recommend this practice because soil must dry to cracking to have a negative effect on root maggots. In addition, draining fields can exacerbate blast and release weeds.

A relatively shallow flood can reduce ovipositioning sites for adult water weevils. In general, medium-grain varieties can tolerate more rice water weevil damage than long-grain varieties. I know on the east side of the Texas Rice Belt, many of our organic rice farmers plant Rondo or Tesanai 2.

I also know some organic rice farmers on the west side of the Texas Rice Belt plant hybrid varieties in spite of the high seed cost. They also plant Presidio, a conventional inbred variety.

Fall armyworm is another insect that can cause serious damage to organic rice. Late instar larvae can completely defoliate rice down to the water level.

Scouting your fields frequently and carefully as soon as the crop emerges through the water is critical to control fall armyworm.

You can apply Bacillus thuringiensis products to control fall armyworm larvae attacking organic rice, and the smaller the larvae, the better the control.

Larvae must ingest this organically approved product for it to be effective; thus, it takes awhile for larvae to die once the product is applied. Some farmers are alerted to fall armyworm infestations when they observe egrets in their fields.

By this time, a lot of damage has already occurred. Rice can withstand quite a bit of defoliation—about 20 percent leaf loss without yield loss. However, when infestations are high and larvae are large, significant defoliation can occur in a short time, especially during high temperatures.

Pre-flood urea should always be applied on dry soil

Pre-flood urea fertilizer applications should always be applied on dry ground and then flooded immediately to minimize nitrogen (N) losses and maximize fertilizer efficiency. When urea fertilizer breaks down, it has the potential to be converted into ammonia gas, which subsequently can be lost to the atmosphere through a process called ammonia volatilization.

Studies have shown that 30 percent or more of the applied N fertilizer can be lost in 10 days. Typically, volatilization does not start for the first couple of days after the application when urea is applied onto dry ground.

However, when urea is applied onto a moist soil or is applied into a standing flood, the urea is broken down quickly and volatilization can start immediately. This significantly increases the potential for larger N losses.

Treating urea with a urease inhibitor that contains the active ingredient NBPT can temporarily protect N from volatility losses when urea is applied onto a dry or moist soil surface. 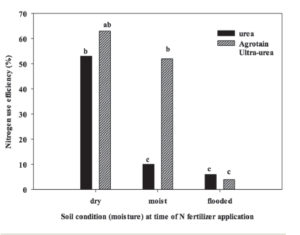 But the protection lasts only half the time (approximately five days) when the urea is applied onto moist soil compared to when it is applied on a dry soil (approximately 10 days). A urease inhibitor will not provide any protection when the urea is applied into a standing flood. Applications of urea applied into a standing flood will also produce N losses from other pathways in addition to ammonia volatilization. This further reduces N fertilizer efficiency in this scenario.

Applications of urea into a standing flood for early season rice should always be avoided when possible. The figure above comes from research conducted in 2015 at the LSU AgCenter Rice Station.

The figure illustrates the N use efficiency (percent of applied fertilizer N that actually makes it into the plant) of urea and NBPT-treated urea when pre-flood applications are made onto a dry or moist soil or into a standing flood.

Consultants and IPM are great investments

The 2016 Missouri rice-growing season and crop was the most diverse we have experienced in many years.

Overall, yields are off probably 15 percent from the five-year average. How do we improve that and make a profit in 2017 growing rice with present prices? I believe most farmers grow rice as economically as possible already. So I have no advice except study your situation with your consultant and be timely with every input.

Due to a very dry fall, Missouri growers have regraded and prepared their fields for 2017 and are ready to plant. Recent
rains have saturated our soils so we’re off to a good start with lower pumping costs.

According to the Missouri Department of Natural Resources, if you are having problems pumping enough water, it’s likely not the aquifer but probably the well.

Cutting inputs and making big changes may not be advisable in most cases. However, this week I recommended to one grower to strongly consider switching from paddy to furrow-irrigated rice. This was after writing last month about being cautious making this switch. Why this recommendation?

Because of his heavy clay soil, strong well, topography, his land was prepared and, most importantly, his knowledge of what he was trying to accomplish. Everything favored him keeping his soil super saturated and not have dry stress spots later this summer.

Early insects and diseases reduce yield and quality and increase production cost, which lowers profit. I follow University of Arkansas recommendations to always plant treated seed. Integrated pest management and consultants are a great investment, and we should never let our guard down checking fields.

Don’t fence me in