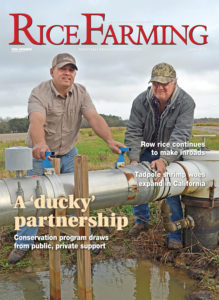 Recognizing that sustainability is gaining importance among rice buyers, producer Michael Fruge wanted to get ahead of the curve. The Eunice, La., rice and soybean grower signed up through the Regional Conservation Partnership Program in 2016 for financial assistance with installing conservation structures and implementing conservation practices on his farm.

“I’ve spent a lot of time in Texas with all of their water issues, and a lot of guys have told us (here in Louisiana) that we need to be proactive,” says Fruge, also president of the Louisiana Rice Growers Association. “They (the state) have already had discussions about charging us for groundwater use although they haven’t moved forward with it yet. If any of this stuff can give us a way to use less water and use it more efficiently, then I’m for it.”

But Fruge is quick to point out that if the technology doesn’t prove to be economically sustainable, he will think twice about continuing to use it.

“This side-inlet (irrigation) and flow meters—you’ve got to have a way to pay for it,” Fruge says.

He is not alone in embracing conservation as rice producers in Louisiana have signed 32 contracts representing about 30,000 acres under the national RCPP during the past year, says Kyle Soileau, Ducks Unlimited rice stewardship coordinator based in Lafayette, La.

The U.S. Department of Agriculture created the Regional Conservation Partnership Program to help provide financial assistance for producers within a specific region who are interested in adding conservation structures and practices to their operations. Rather than reinvent the wheel, RCPP draws from the Natural Resource Conservation Service’s existing Environmental Quality Incentive Program and Conservation Stewardship Program.

The Rice Stewardship Partnership, led by USA Rice and DU, has harnessed RCPP funding. Joining the two groups are more than 40 other industry partners.

Along with a regional focus, the rice program involves commodity-specific conservation efforts. The national RCPP has three goals that all projects should meet to qualify for funding: improve water use, nutrient management and therefore water quality, and wildlife habitat, Soileau says.

Between July 1, 2015, and June 20, 2016, the first full year of implementation, the effort provided about $8.3 million toward about 220 contracts for conservation measures covering more than 92,100 acres, according to the Rice Stewardship annual report. Similar participation is expected for the 2016-17.

“The Rice Stewardship partners, along with producers, applaud the National Resources Conservation Service for its vision and creation of RCPP,” says Scott Manley, DU director of conservation programs in Ridgeland, Miss.

Since its inception, Rice Stewardship and its the rice-focused RCPP have seen strong grower interest, he says.

John Hankins, Rice Stewardship Partnership coordinator with USA Rice in Little Rock, Ark., agrees. “This is all rice-focused funding,” he says. “If they apply for funding, it’s targeted to rice growers so it takes away a lot of competition within other NRCS programs. It increases their ability to e funded by a significant percentage, sometimes by double, so you are giving them an extra pot of funding that wouldn’t be there had we not gone out there to get it.”

Hankins says the program also is designed to encourage use of techniques that can save inputs and save money, which makes the operations more profitable. “We’re taking some of the risk out of that change, so we’re helping facilitate change,” he says. “This funding goes directly to changes on the ground, so we’re encouraging change at the field level.”

In addition to national rice efforts, some states also have secured additional funding for local efforts. In Louisiana, for example, what folks call the LA-1 RCPP is a rice stewardship program with $800,000 in producer financial assistance.

With $600,000 of financial assistance available, the LA-2 RCPP is a water quality project focused on nutrient management.

Soileau says his goal for LA-2 is to sign up growers representing about 20,000 acres. Based on grower visits and  sign-up sheets, he already has 100,000 acres’ worth of interest.

California also has a state-based RCPP led by the California Rice Commission.

The RCPP conservation funding was part of the 2014 Farm Bill. As the U.S. Department of Agriculture and Congress begin work on the 2018 law, Manley says he believes they will continue to include a strong conservation focus.

“Whether it’s called RCPP or called something else, rice and its environmental and wildlife benefits will always be ripe to take advantage of conservation initiative funding through USDA,” he says.

All in the family

Fruge’s father, Raymond Fruge, who also farms rice near Eunice, has been a strong proponent of conservation for more than a decade. The senior Fruge signed one of the first Environmental Quality Incentive Program contracts in the area 15 years ago. He also is in the last year of a five-year Conservation Stewardship Program contract.

Through RCPP, Raymond Fruge has added additional pipe drops to his fields. He also had about 300 acres grid soil sampled in 2016.

In return for RCPP financial assistance, Fruge agrees to plug drains in his fields during the late fall and winter to capture rainfall and provide winter waterfowl habitat.

As part of the local nutrient-management effort, Michael Fruge already has had about 200 acres grid sampled.

“If it calls for it, we’ll use a variable-rate program,” he says. “We did some last year but not under RCPP—they were fields I was having trouble with.”

He had phosphorus and zinc applied using variable rate by a custom applicator. After just one season, Fruge says it’s too early to tell what type of improvements the precision application provided.

Under the national RCPP, irrigation management has three levels of participation: low, intermediate and high. The younger Fruge signed up for the intermediate program, which also involves on-farm weather stations and flow meters.

The weather stations, costing about $1,600 apiece, are on two different farms about 3 miles apart and record temperature, relative humidity, rainfall and evapotranspiration. Despite their proximity, Fruge says the weather station data varies widely.

He can access the information remotely using a laptop, tablet or smartphone and uses it, along with an irrigation scheduling program, to determine how much water to apply.

As part of Fruge’s agreement, he also records information from the flow meters — gallons per minute and the duration of the pump run — each time he adds water to a field.

This season, he also plans to use multiple-inlet rice irrigation on two fields.

The technology doesn’t fall under RCPP, but Fruge says DU conservation planner Keith Latiolais is interested in the practice and plans to help him work out the bugs.

Studies conducted by the University of Arkansas show MIRI can help growers reduce water use by up to 25 percent compared with conventional irrigation.