We have had some good ground working weather in the Texas Rice Belt during November and December, so proactive farmers are breaking and leveling ground in preparation for the 2020 rice crop. This fall/winter preparation is crucial to planting early — some Texas rice farmers try to plant as early as mid-February.

Early planting allows for avoiding late summer and early fall rains, which play havoc with main crop harvest, and for ratoon cropping. As you well know, Hurricane Harvey dumped about 4 feet of rain on parts of the Texas Rice Belt in late August 2017.

Then, Tropical Depression Imelda clobbered the eastern Texas Rice Belt with 30-40 inches of rain in a 24-hour period in mid-September 2019. So both varietal selection and early planting are extremely important in producing a high yielding/quality crop.

We finally have some 2019 variety/yield/quality data based on the Texas Rice Crop Survey. Texas grew about 154,000 acres of rice with the top five most popular varieties being XL723, Clearfield XL745, Presidio, Jupiter (medium grain) and CL153.

I suspect Texas growers will rely on some of these varieties again in 2020. Main crop yields were highest for Clearfield XL745, followed by CL151, CL153, Cheniere, XL723 and Presidio. Average main crop yield across all varieties was about 7,300 pounds per acre.

Highest head rice yields were reported for Cheniere, CL153 and Clearfield XL745. About 53% of our main crop was ratooned, with highest yields reported for XL753, Clearfield XL745, XL723, Presidio and CL153. Average ratoon crop yield across all varieties was about 3,100 pounds per acre.

As for narrow brown leaf spot, the following varieties are very susceptible or susceptible: CL153, CL151, CL111, CL163 and Cheniere.

Finally, we highly recommend you apply an insecticide and fungicide to your seed. This is good insurance, and the increase in yield and quality will more than pay for the treatments.

One of the most important choices a grower makes each year is determining which varieties and hybrids to plant. There are many things to consider when selecting which variety to grow including disease resistance, yield potential, lodging susceptibility, ratooning potential, seed cost, profitability and the appropriate herbicide resistance seed technology.

Regardless of the cultivar, it is always a good idea to diversify your selection to avoid the risk of yield loss due to disease, lodging or insect outbreak that specifically targets one cultivar.

The new Provisia variety, PVL02, will be commercially available for the first time on a limited acreage in 2020. PVL02 has many advantages over its predecessor, PVL01. PVL02 has a greatly increased yield potential, and it also matures almost two weeks earlier than PVL01.

In addition, PVL02 has shown to have a good ratoon yield potential, which is extremely important for our South Louisiana rice growers.

Disease potential is slightly improved with PVL02; however, it is still moderately susceptible to blast, sheath blight and cercospora. It is considered susceptible to bacterial panicle blight. The grain length of PVL02 is shorter than its predecessor and milling is also improved.

Last, but not least, PVL02 leaf color is back to the typical darker green we are used to with our southern long grains.
The initial Provisia release, PVL01, will also be available in 2020 if you would like to try the Provisia herbicide resistance program.

RiceTec has partnered with Adama, which will provide the IMI herbicide for FullPage. The FullPage system will be similar to the Clearfield system; however, instead of Newpath and Beyond, Prescript and Postscript herbicides will be used.

I had the opportunity to test the nitrogen response for the FullPage hybrids, RT7321 FP and RT7521 FP, in 2019. These hybrids performed well in my trials and had a similar yield potential to RiceTec’s other hybrid offerings.

The nitrogen response of both FullPage hybrids in our limited testing was similar to Clearwfield XL745 and Gemini 214 CL.

Little herbicide testing of the system at LSU has been conducted so far. However, I was told that the tolerance of the new FullPage hybrids is higher than the Clearfield hybrids.

This will bode well for our early season IMI applications on young hybrids, especially if we are cold and wet again in 2020.

Varietal selection is one of the first and most important decisions a rice grower will need to make each year. When deciding, first consider the maturity class that fits into your farming operations and climatic zone.

However, a closer look at variety trials in the coolest areas of the region (Davis and near the Sacramento airport) shows that M-105 generally outyields and matures faster than M-206. One issue with M-105 is that it seems to be more prone to lodging than M-206 — so experiment with M-105 before growing it on a large amount of acreage.

M-210 is a new Calrose medium-grain variety with improved resistance to the rice blast races found in California. It was developed from a DNA marker-assisted backcrossing program, is essentially “M-206 with additional blast resistance” and is designed for those areas in California that have had issues with rice blast. It replaces M-208.

A disease survey conducted in 2019 found that 80% of fields surveyed in Glenn County had at least some blast (in Colusa and Butte counties, it was 30%). There was also word from some growers in Glenn County that blast severely reduced yields in a few fields.

Given this, M-210 should be considered for areas where blast is a problem. Results from 2019 rice variety trials located in Glenn, Butte and Colusa counties showed that average yields across these locations for M-210 were 96.1 hundredweight per acre versus 92.4 cwt per acre for M-206. On average, M-210 headed one day later than M-206.

As a reminder, due to weedy rice concerns, the California Cooperative Rice Research Foundation Board of Directors in 2016 passed a policy that only classes of certified seed (foundation, registered and certified) of CCRRF rice varieties may be planted.
Effective in 2019, the California Rice Certification Act requires that all rice produced in the state come from seed enrolled in an approved certified seed program or a quality assurance program.

These steps were taken to ensure that fields are planted with seed that has been screened for the presence of weedy rice types.

Handlers will be requiring proof that rice delivered to the mills has been grown with seed that meets these requirements.

Do your homework before selecting varieties

It seems like every year when I sit down to write about variety selection, it is pouring rain. Today, Dec. 16, is no different, with a strong cold front moving through and heavy rain forecast to already damp ground. Any hopes for fieldwork in late December through early January is pretty much gone by the wayside. So if we can’t spend time in the field, we have the opportunity to sit in the office and pour over data to help us make a better-informed cultivar selection decision.

Over the past month, cultivar selection data has started to be released from each university in the Mid-South cataloguing next year’s offerings and their performance potential. Cultivar selection decisions are perhaps the first and most important choice a producer has to make affecting next year’s profitability, aside from fall fertility decisions.

There are numerous excellent varieties and hybrids available for Mississippi producers in technology trait and conventional management systems. With so many options available, it’s often difficult to decide. Relying on university-sponsored variety trials conducted at multiple locations can aid in seed selection decisions.

Diamond and Thad were released from Arkansas and Mississippi, respectively. Each of these varieties has performed well on limited commercial acres in Mississippi.

PVL02 has also looked very good in limited testing outside of the official variety trial, and limited seed supply should be available in 2020.

Remember no single variety is the silver bullet, and spreading risk with multiple varieties and production systems is a good practice.

Cultivar selection is half the battle

Rice acreage in Arkansas is expected to increase substantially in 2020 after record prevented planting resulted in low acres for 2019. Making planting decisions early will help to ensure getting the cultivars of choice as supply tightens with increased acreage demand.

Hybrids performed well in 2019 given the delayed planting window but did have some inconsistency in those conditions. There are a few new hybrid offerings to choose from in 2020. RiceTec’s XP753 continues to be the most widely grown cultivar in Arkansas and likely will be again for 2020. RT 7301 only had limited testing in 2019 but looks comparable to XP753 with similar yield and milling. RT 7501 also yields similarly to XP753 but has slightly better milling.

RT Gemini 214 CL has been a very good Clearfield hybrid that will continue to dominate for 2020 based on yields similar to XP753 with very good milling. FullPage hybrids RT7321 FP and RT7521 FP will also be available this year. These, like Clearfield hybrids, are tolerant to IMI herbicides (Preface and PostScript instead of Newpath and Beyond). These two FullPage hybrids are very competitive with Gemini 214 CL for grain yield, and RT7521 FP may even have slightly better milling.

Clearfield varieties also performed well in 2019 where we were able to manage them in a timely manner. CL151 continues to show high-end yield potential, particularly where it can be actively managed and disease pressure is low.

CLL15 is a new offering that appears to have a similar high-end yield potential but with a much improved disease package. The better disease package should improve yield stability for CLL15 across a range of environments. CLM04 is a new medium-grain Clearfield with a good disease package and yields that compete with Jupiter and Titan.

Conventional long-grain varieties are essentially narrowed to Diamond for 2020. It continues to provide the most consistent yields compared to other long-grain varieties. For conventional medium-grain varieties, Jupiter and Titan have very similar performance. However, Jupiter’s later maturity provides more flexibility in management timing to achieve top yields, while Titan must be managed much more timely. The advantage to Titan is that it heads five to seven days earlier than Jupiter and is ready for harvest up to 10 days earlier.

For the most part, regardless of cultivar selected, our maturities are very similar so it is difficult to spread risk based on maturity alone anymore. The preference is to grow multiple different cultivars and spread risk based on a combination of maturity, disease package and yield potential.

The earlier we are allowed to plant, the greater our yield potential. To maximize yield across the board, plant varieties first followed by hybrids. While all cultivars lose yield as we plant later, hybrids can have better yield stability later, and the lower seeding rates don’t always withstand tough early season conditions during stand establishment. In addition, plant varieties on your fields that are easier to manage as hybrids will continue to perform well even on difficult-to-manage ground.

This table presents the results for selected cultivars in the Arkansas Rice Performance Trials from 2017-2019. Note that some cultivars have only been tested for two years, and this affected their three-year average. Additional information can be found at http://www.uaex.edu/rice. 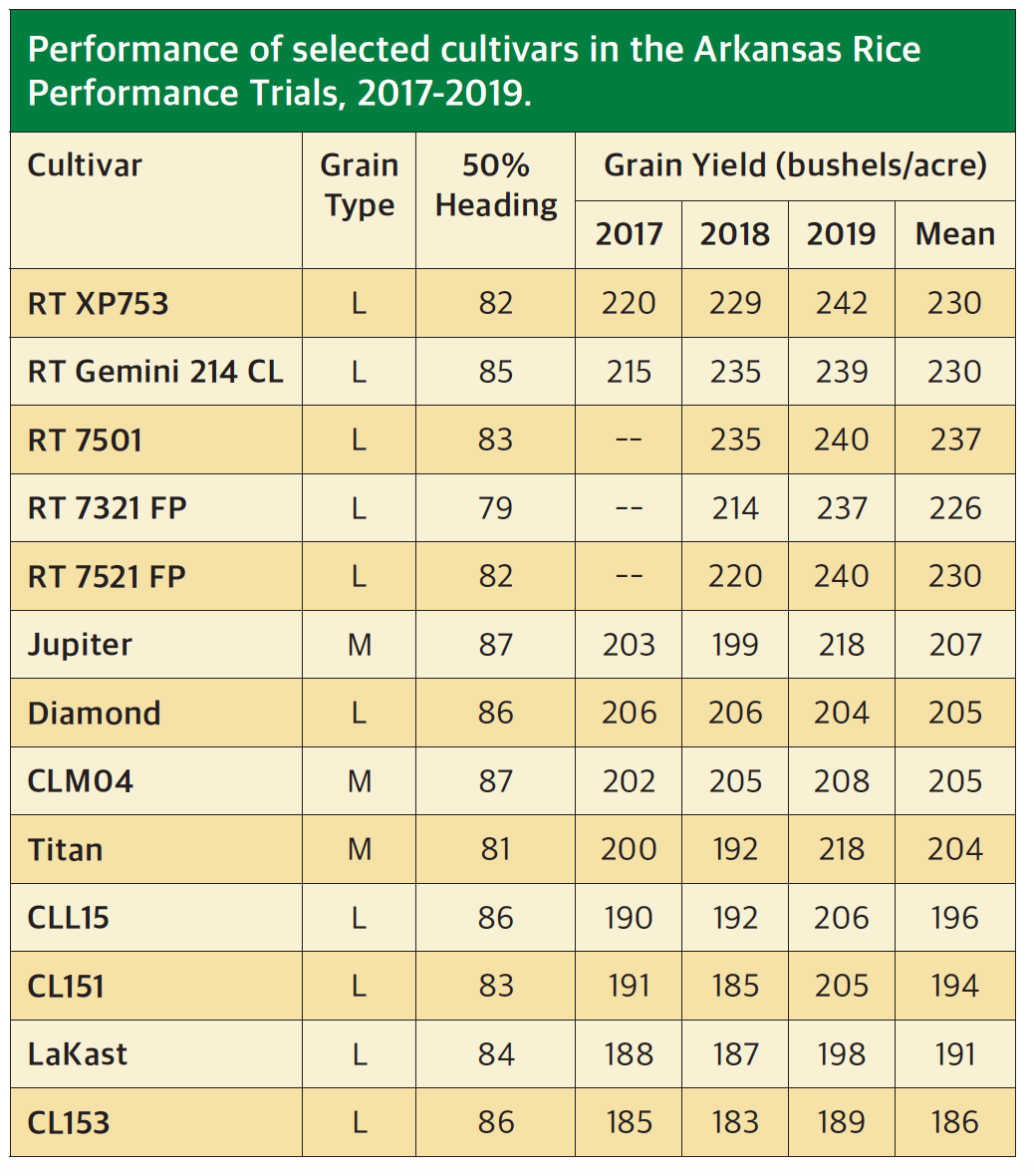