Panda, a chocolate Labrador that calls the University of Arkansas’ Pine Tree Research Station home, has become somewhat of an unwitting social media celebrity. Although she doesn’t have her own Twitter account like Pedro, the #catsupervisor at the university’s Lonoke Extension Center, Panda is frequently featured in Pine Tree’s tweets. (To view the postings, visit Pine Tree’s Twitter feed at https://twitter.com/stationpine.)

In fact, the station recently started using the hashtag, #ambassadog, when it posts photos of the affable chocolate Lab.

Panda’s social media popularity took off when she recently lamented in a Twitter post about not having a face mask to wear as part of social distancing. This came shortly after a face covering was added to the avatar — or social media account icon — for LonokeUAEXCat, the account under which Pedro tweets.

Thanks to some creative minds within the U of A System Division of Agriculture’s communications department, a photo of Panda soon appeared on Twitter with her sporting a face mask. It proved wildly popular. 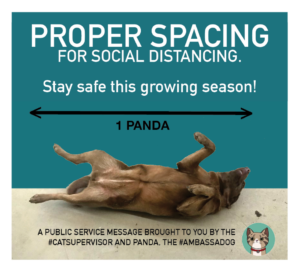 “Wow — I didn’t realize how people would react to that photo of Panda,” says Mary Hightower, chief communications officer. It turned out to be one of the Division of Agriculture’s most engaging posts that day.

Only a week before, Panda appeared in one of the university’s public service posts that put 6-foot social distancing in perspective. It’s roughly the length of one chocolate Lab stretched out. Thus began the campaign #pandalengthapart.

Panda showed up at the remote Pine Tree Research Station one day a couple of years ago, says resident station director Shawn Clark. But she was different than most of the strays people had dumped at the facility. Panda looked like she’d been well cared for and had a collar with her name and owner’s phone number.

In a conversation with the owner, Clark learned Panda had escaped from a fenced enclosure. She was returned to her owners but continued to escape and visit her friends at Pine Tree, which was at least a 2-mile trek.

“We talked to the owners and they put her in a fenced-in area with a nice dog house, but she would not stay in it,” Clark says. “She would do everything in the world to get out of the fence. She was a true escape artist.”

After several of these back-and-forth trips, the owners asked if Pine Tree wanted Panda since she appeared drawn to the station.

For more than a year, Panda lived with Jody Hedge, one of two employees who resides on the station. In the morning, she would ride to work with him and in the evening return home with him. Hedge even built a dog house outside to keep Panda dry during the rainy winter.

More recently, she has taken to disappearing for a few days here and there after she discovered the station’s neighbors, who have children and are pet lovers.

Clark jokes that while the station treats Panda like a princess, the neighbors treat her like a queen.

During the spring and summer when graduate students are working at Pine Tree, the chocolate Lab frequently works the crowd during morning meetings.

“She loves attention – it’s all about attention,” Clark says. “If you pay her any attention, you have a friend in Panda.”

Mention a ride in a pick-up truck, and you’ve also won her over.

Panda has gained a reputation among the graduate students and faculty at the university’s Fayetteville campus.

Before Nathan Slaton became assistant director of the university’s Arkansas Agricultural Experiment Station about two years ago, he was a soil scientist who conducted research at several of the research stations, including Pine Tree. Like many other visitors from Fayetteville, he got to know Panda.

“She’s like the official welcoming committee for the Pine Tree Research Station,” he says. “If you get there before most of the crew — it’s hard to beat them being the first one there — but if you happen to show up before most of the crew, Panda will typically find you and greet you with her wet, muddy paws. Same thing in the afternoon.”

Despite a few road bumps, farmer-owned brewery is up and brewing

Despite COVID, work progresses on University of Arkansas’ NERREC

An ode to rice field days