A forecast for U.S. rice imports through 2060 and some reflections on how the world rice price really works

What you need to know about the rice market in the United States is that the rice market in the Americas, North and South, is a major part of the demand base for U.S. grown rice; yet, the entire Western Hemisphere is only a small part, only about 5%, of the world’s total rice production and consumption. Most of the world’s rice grows and is consumed in Asia, where humankind first cultivated rice many centuries ago. Now East is meeting the West in the case of U.S. rice consumption. Let me explain myself.

I love an old Chinese proverb that says, “More precious than pearls or jade are the five grains of which rice is first.” Hence, the Chinese name for rice is Firstgrain, which is also the name of the rice advisory business I started 22 years ago. Rice is very precious to China. Over 70% of all irrigated water in water-short China goes to grow rice.

The Chinese know how precious rice and water can be. A Zen proverb says, “When you boil your rice, know that it is the water that is your life.”  If your child is starving, you will sell your jewelry to feed your child rice. The United States hardly knows this kind of deprivation, and that is a great blessing that we in the United States have not experienced such dire hunger and famine.

There are two critical things to understand about the U.S. rice market. U.S. domestic rice consumption is the only market in the Americas that is growing strongly; but the consumption growth is in the kind of fragrant rice that farmers grow in Asia. Imports are growing, and domestic demand in the United States is also growing for aromatic or fragrant rice, such as jasmine or basmati.

Let me explain myself here. It’s not a coincidence that U.S. rice consumption is increasing as the population of Asian Americans has been growing smartly. Charts 1 and 2, regarding the fragrant rice industry in the United States, are courtesy of Tanner Ehmke, lead agricultural economist at CoBank in Denver, Colorado. 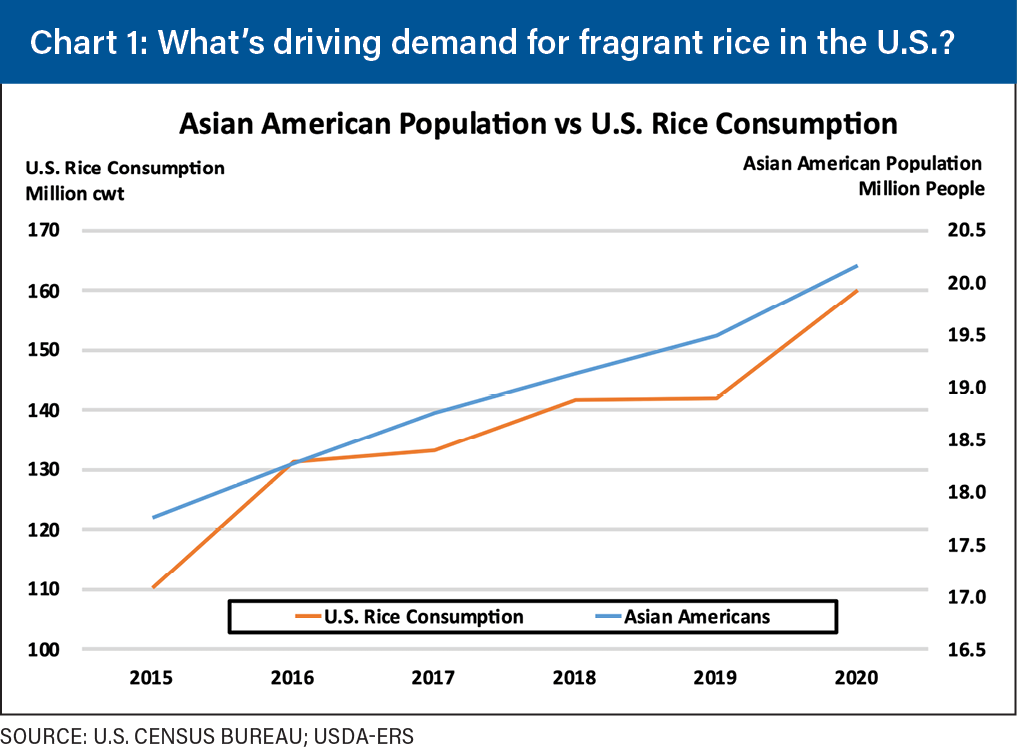 As container rates moved higher in price, Asian imports became less competitive with U.S. rice. Conversely, as the U.S. dollar strengthens, Asian imports become more competitive with domestically grown rice in the United States. With the recent disruptions in container rates that went extremely high, rice imports to the United States fell off. Now they are coming back with the end of congestion for containers landed on the West Coast. Also, it will be interesting to see if the weaker dollar recently negatively impacts U.S. rice imports in the period ahead.

The significant factor affecting the demand for imports into the United States in the long-term through 2060 should be the projected rate of growth in Asian Americans. In Chart 3, Pew Research anticipates that this element of U.S. rice demand should grow by 85%. Asians, as we mentioned at the outset, are the largest consumers of rice in the world.

The challenge of the U.S. rice industry is to find U.S.-grown, fragrant varieties that reward the U.S. farmer with good profits while meeting the discriminating taste of Asian consumers. If the United States cannot accomplish this task of rice breeding, a major share of the rice consumed in the U.S. will come from Asian suppliers over time.

Charts 4, 5 and 6 help explain how the world rice market works. The world rice market divides into two parts. First, there is China and India — or what is known as “Chindia,” which consumes about 51% of all the rice produced. The other half is what I call the Rest of the World or ROW. This half consumed about 49% of all the rice produced. The ROW includes some major rice countries like Bangladesh and Indonesia as well as many smaller countries like Nepal and Italy. 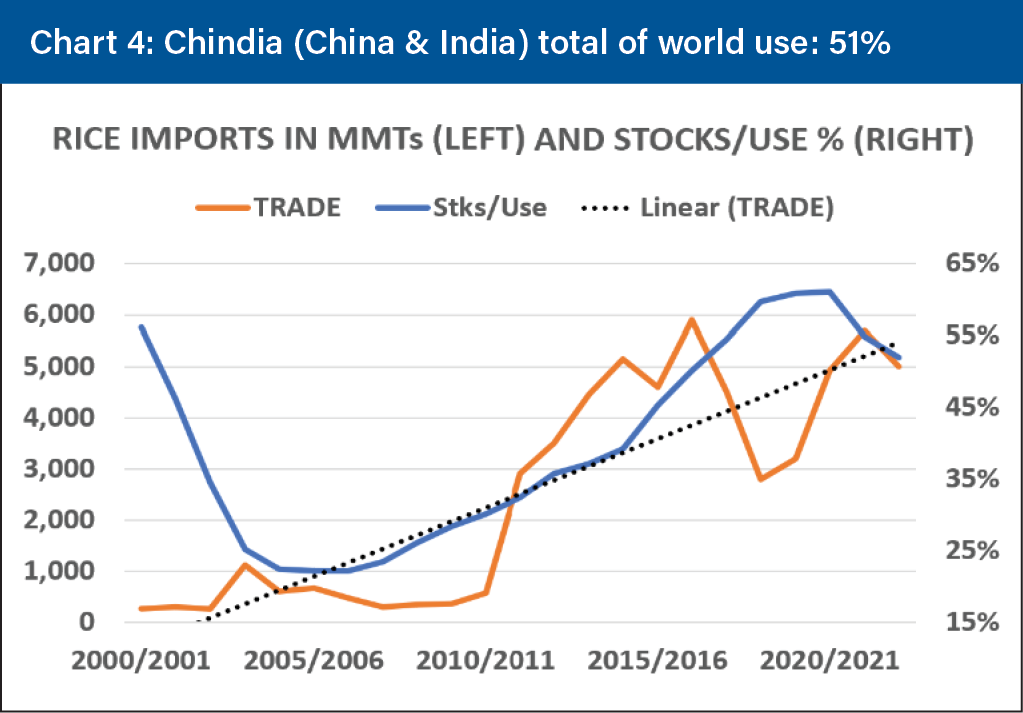 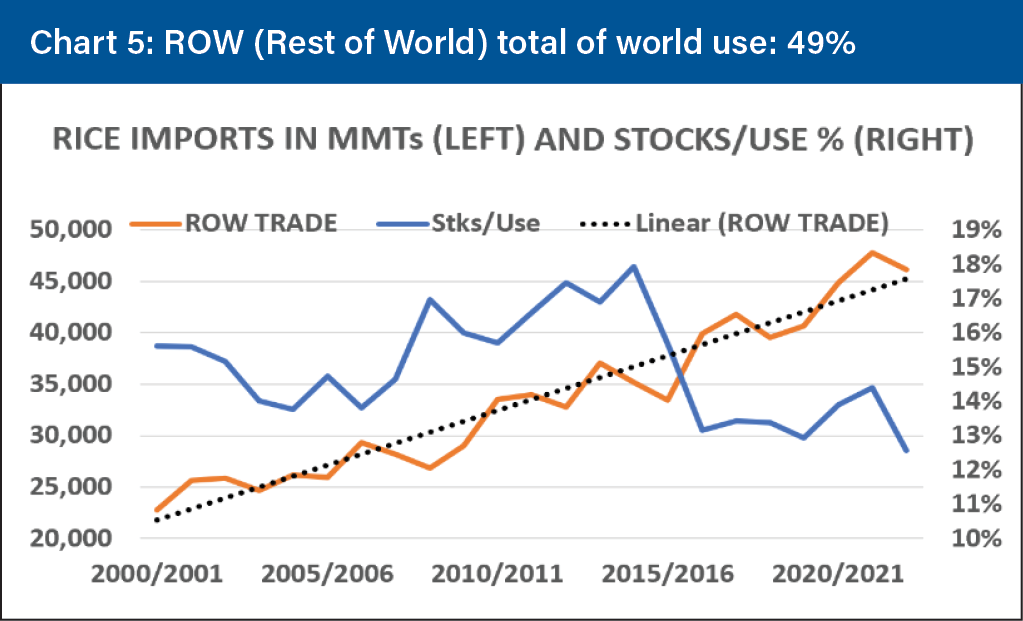 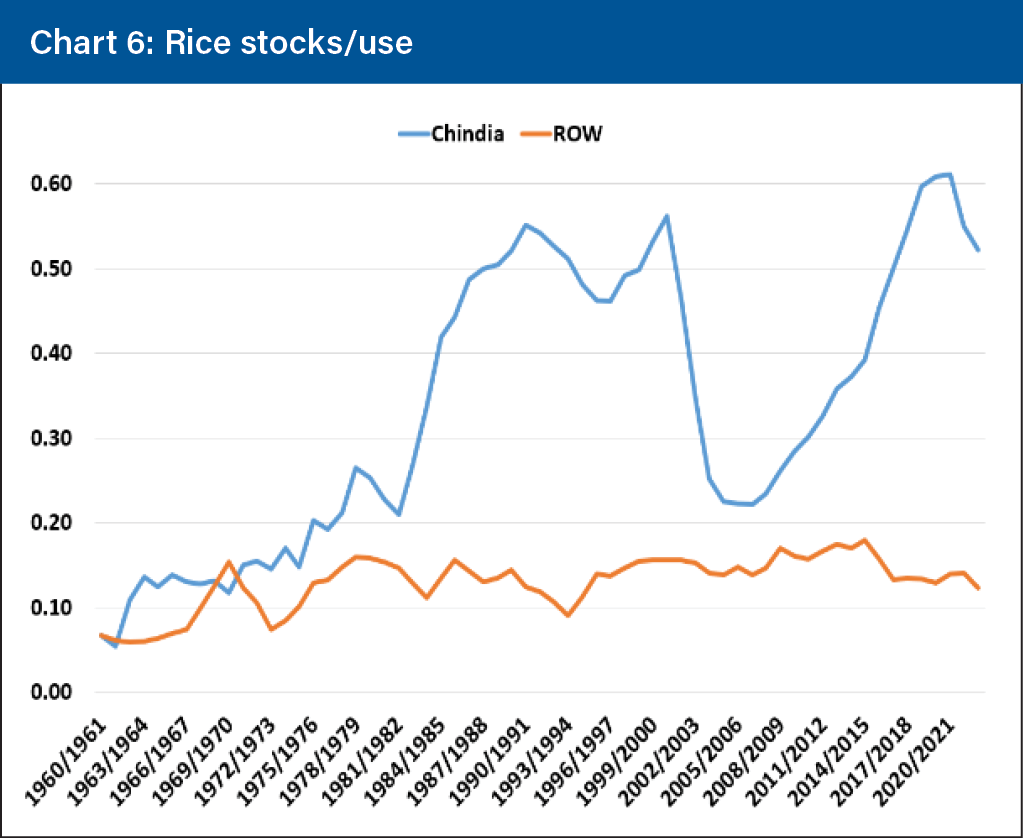 If you look a little closer at these two charts, the trend in rice imports and stocks-to-use ratio are different between Chindia and ROW. Imports in Chindia have moved irregularly higher since 2000 because China is the world’s largest importer of rice now. Imports into the ROW have risen steadily by over 20 million MT since 2000 to a major share of world trade. The significant difference between Chindia and ROW is the trend in rice stocks/use. Since 2000, stocks/use in Chindia have moved irregularly higher until a couple of years ago but are now falling. Since 2000, stocks/use in ROW have been falling since 2015. From 2008 to 2015, stocks/use rose greatly. Then from 2015 to 2022, stocks/use have virtually collapsed. Currently, stocks/use in ROW are at the lowest level since 1995. More importantly, the stocks/use mentality has turned from “just-in-case” inventories to “hand-to-mouth” in the Rest of the World, or ROW.

The change in rice inventory philosophy since 2015 in most countries that import rice may be due to rice buyers assuming that India has rising stocks and rising production and has the cheapest rice in the world. So, why spend any money owning any more rice than the bare minimum? That’s a good question.

India, the world’s second largest rice producer and largest rice exporter, has the cheapest rice because its currency has been collapsing relative to the U.S. dollar, and they also heavily subsidize the inputs to grow rice. Altogether, the impact of rice subsidies and a devaluating currency account for the disparity between export offers from India versus from the Americas. Since 2015, ROW rice stocks have declined from 18% of consumption to about 12.5% of consumption. That decline is worth about 7-9 million MTs of lost import demand. In both halves of world rice consumption, rice imports have been in a strong upward trend. At some point, rapidly rising import demand will lock horns with declining stocks/use and drive rice prices higher as happened in 2007/2008. Now, ROW rice stocks/use are considerably lower than in 2007/2008.

It’s a known fact that the stocks of rice in China are a state secret and, therefore, at best, are just an educated guess. That is why the U.S. Department of Agriculture in the past has looked at rice statistics also without including China in world totals. For example, trade sources tell me that in 2022 China lost 15% to 30% of all the rice grown in the South of China, which is about 48% of all the rice grown in China. But USDA reports its production down only 1% in 2022. We know the drought was bad because its hydro-electric output was severely reduced, forcing China to turn to more use of coal in 2022.

Since 1960, stocks/use in the ROW is now at the lowest level since 1995 and headed lower. In addition, India, concerned about its rice stocks, recently implemented a steep export tariff on non-brokens rice exports and a ban on brokens rice, a preferred type of imports for China that is used for feed because it is cheaper than domestic corn. It’s not clear that Chinese rice stocks are available for export at current price levels either.

World rice production in 2023 may decline due to the resurgence of the COVID pandemic inside China, or the unavailability of input nutrients or inputs that are not affordable. Many buyers could begin to build reserves, just-in-case. We are moving away in any case from a tightly connected and globalized world of buying and selling into something more unpredictable and more dangerous as the United States reduces its military support of global grain trading to protect against bad actors.

As of this writing, several key rice markets are elevating in price in the Americas and Asia. When a market leans too far in one direction, such as hand-to-mouth/just-in-time buying, the price of the commodity can get away from the buyers.

Technically at least, my long-term averages in Chart 7 suggest a potential breakout to the upside in 2023 as occurred in 2007, the last time commodity inflation was on a global tear. 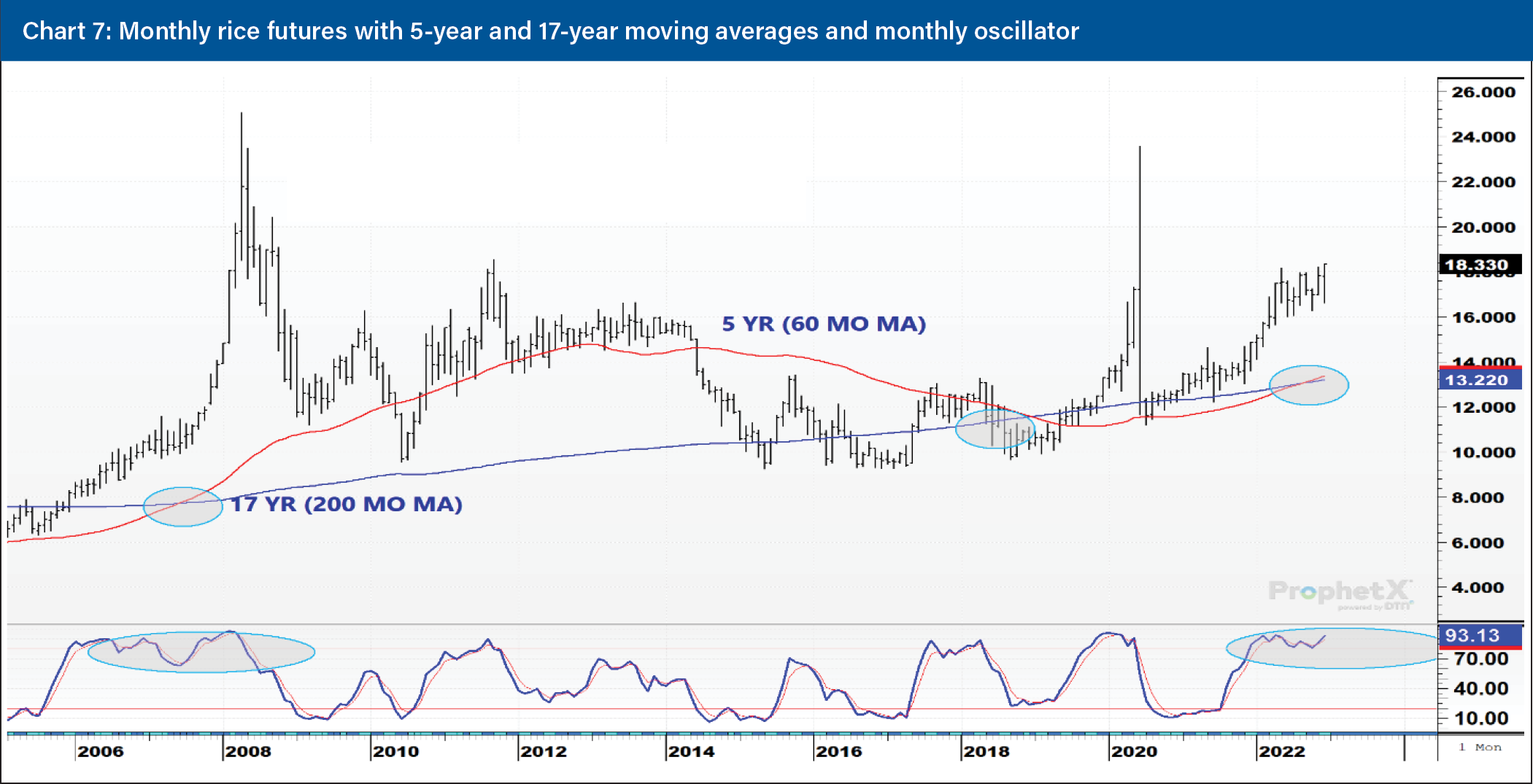 I see the 5-year moving average already has crossed over to the upside of the 17-year moving average. Our Moving Average Convergence Divergence (MACD) oscillator is still in a buy mode. (The MACD oscillator is one of the most popular and widely used technical analysis indicators that traders and analysts use to gauge momentum in markets). The last crossover to the upside occurred in mid-2007, 15 years ago and the price did not look back until it reached a new high in 2008. If the market can move above the previous highs up ahead, and global inflation remains in an uptrend, the high for the 2022 and 2023 crop years may lie ahead of us, not behind us.

As they say, the market will tell its tale. None of us know for sure what will happen in 2023. But we must continue to learn. Eric Hoffer in his book, The True Believer, said, “In times of change, the future belongs to the learner, while the learned will find beautiful ways to cope with a world that no longer exists.”

With so much change coming our way soon, we need to be learners. Or as Corrie Ten Boom, a survivor of a Nazi death camp, advised us, “Do not be afraid to trust an unknown future to a known God.” She also said, “Worry does not empty tomorrow of its sorrow, it empties today of its strength.”

Milo Hamilton is Senior Economist and CEO of Firstgrain Inc., Austin, Texas. Contact him at 512-658-8761 or milo@firstgrain.com.